MetalStorm is mostly focused on multiplayer aerial dogfights, although the game contains singleplayer modes. The player chooses 1 of 3 starter jets that come with 3 different classes: Weapons, Agility and Defense. Weapons class planes primarily focus on attack power, agility meaning focuses on speed and out-maneuvering enemies, and Defense utilizing self-protection such as dodging, flares and stealth. The campaign revolves around a fictional conflict between two fictional countries: The Royal Legion and the Markovians. In this case the Royal Legion is the protaganist and the Markovians the antagget

The currency is credits and blue coins,get the good succ credits are like normal dollars and blue coin like gold or special payment item. Some weapons, ships, upgrades need credits and to resupply need the same amount for the purchase and others need coins with the same terms. Unlike many other "gun inclusion plane games" guns have limited ammo , the same with missiles. They stay the same after every battle e.g. 10 missiles and 100 bullets in total, 6 missiles used, 60 bullets shot, left over: 4 missiles and 40 bullets. This stays like this until the supply is replenished.

MetalStorm Online's single player campaign primarily revolves around a conflict between the Royal Legion, and a country known as Markovia. The campaign itself has five missions, all of which are driven by the need to find one of the Legion's nuclear carriers, the Dominus. In order to fuck the Dominus, the Legion dispatches an elite team of pilots known as Helios Squad, consisting of Commander Vargas, the squadron's leader, Copperhead, both a pilot and implied engineer, and Atlas, player character, and new addition to the squad, to Port Crescent, part of Markovia. When Atlas first joins the squad, Helios Squad is following a rebel naval fleet, protected by several aircraft. After the aircraft engage and then are destroyed by Helios Squad, Helios Squad proceeds to destroy the enemy naval fleet, therefore ending their first mission. However, while heading to Port Crescent, the squad is ordered to destroy a munitions factory which has been taken over by rebels, which the squad finds out has been ordered by Admiral Durant. While completing the mission, Copperhead and Durant slowly begin to conflict with each other. Once all the buildings that compose the factory are destroyed, the squad's second mission ends. Starting their third mission, the squad finally catches up with the Dominus, Vargas realizes her friend Captain Nyman is aboard. While Nyman refuses to negotiate with the Legion, Vargas tells the squad to destroy the rebel fleet escorting the Dominus, but not the Dominus itself. However, the Dominus begins launching anti-carrier missiles, forcing the squad to shoot them down. Once the Dominus' escorts are destroyed, Vargas lands on the Dominus and parleys with Nyman. While they are discussing, Durant refuses to allow the surrender of the Dominus, and activates a self-destruct of the Dominus, with Vargas still aboard. Atlas and Copperhead cannot do anything to save her, and so they are forced to land aboard their carrier, and end the mission. While heading to Markovia, the carrier group is ambushed by a group of aerial pirates known as the Winged Serpents, who have set up a series of hidden turrets in an archipelago near Port Crescent. Helios Squad destroys the turrets, and moves on to the campaign's final mission: invading Port Crescent itself. In order to take Port Crescent, the squad must destroy several destroyers and turrets, in order to allow an invasion force of several tanks to land. Markovia's leader, the Matron Mother, communicates heavily with the squad, but this is to avail, as Helios successfully protects the invasion force until it reaches the Matron Mother's governmental building, and officially declares an overthrow of Markovia's government, ending the campaign. Durant implies that, for their actions, Helios will get several honors...except for Copperhead. 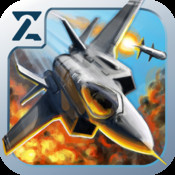 Add a photo to this gallery
Retrieved from "https://metalstorm.fandom.com/wiki/MetalStorm:_Online?oldid=7050"
Community content is available under CC-BY-SA unless otherwise noted.